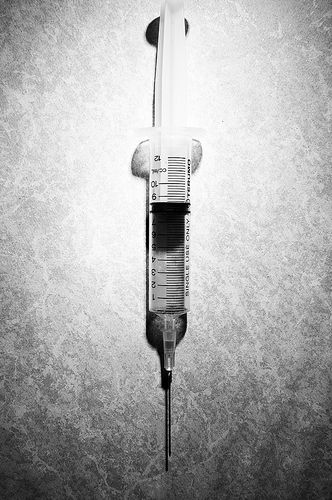 I don’t know which is worse. My daughter’s fear of getting shots or my fear of hearing that she needs one. Call me a wuss, but bringing her to the doctor when there’s even a chance that she’s gonna get poked, is like being at a bullfight … when you’re the matador.

In other words, I’d rather stick needles in my eyes, which is of course totally ironic.

Look, it’s not just miserable for me, it’s miserable for the nurse who must administer said shots, the other little patients who are set off by the possible whizzing by of a frantic 7-year-old and the wretched ear-shattering noises she’s making, not to mention their parents and the doctors, who must explain that, though it sounds like it, there is in fact, not an amputation occurring.

I start to ask myself…

Really how bad can a bout of the flu be? Chicken Pox? The Mumps? My husband, who’s never been to one of these “awesome” visits, or any that I can recall, says my fear or her getting needles is unfounded. By that logic, I could claim that anything I haven’t seen doesn’t exist, but it wouldn’t make it true. Please, there’s no such thing as Africa, everyone who hasn’t been there knows that.

The first thing my child asks at the onset of a stomach cramp, a headache, a sore throat, a paper cut… is: “Will they give me a shot for this?”; “Mom, do they give shots for red ant reactions, rashes, bee stings?”

She’ll start to cry if you mention the word needle in any context and she’s catagorically decided she will not be having babies because she once overheard me discussing an extensive blood test that pregnant women get.

Heck, after she’s gotten a shot, when the nurse says, “All good, you don’t need another one of those for five years” she glosses right over that reprieve, when kids decide the process wasn’t THAT bad, and continues to cry at the thought of the needle that she’s due to get FIVE YEARS FROM NOW!

I’m guessing many of you know where I’m comin’ from. You know the “needle dance” you’ve done “the chase.”  You’ve seen every nurse and parent trick from the telling of a joke, to the “let me pinch your arm to show you how it will feel,” to the “we’ll go to this fast food joint or get this toy after,” to the “watch your sibling go first,” to the “it doesn’t hurt as much as (insert semi-painful occurrence here).” They don’t work.

In the end, I have to hold her on my lap, arms wrapped around her and squeeze like a boa constrictor – to keep both her body from jolting, and tears from coming out of my eyes (at the thought of the stress this is causing her … and me).

The last time we got a shot was around her birthday and I strategically planned to get her an iTouch5 on the way home. I’ve never seen her shape up so fast. See, I found the answer in my pocketbook, where lot’s of answers lie. Sadly, most of us can’t, myself included can’t whip out that kinda dough the other 364 because of a flu shot or vaccine. Unless, you’re Angie and Brad. If their kids have an aversion to something, I imagine they could fix it tout suite.

“Just try the Brussels sprouts and you can get another iPad mini.”  “Go to the dentist and we’ll pay him to be your man servant for the rest of the afternoon.” “Make your bed everyday for a week and we’ll rent out Disney World.” You know, something like that?

So, my husband will definitely be in tow at the next visit, for moral support, oh and for a lovely, I told you so moment. Wait, scratch that, I’m sending her to Brad and Angie for her next round of shots… Yo, Angie, she’d really like to go to Paris.

Please tell me I’m not alone?

BE AWESOME, IF YOU FEEL ME, SHARE THIS POST WITH OTHER MOTHERS
BE AWESOMER, TAKE MY DAUGHTER FOR HER NEXT TETANUS BOOSTER