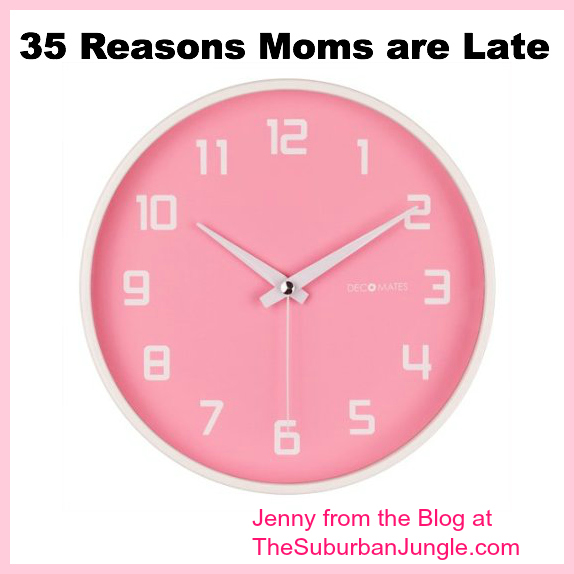 I was never an incredibly punctual person, but but becoming a parent has put a whole new spin on my excuses for being late to meetings, school drop off, parties and appointments. As was made apparent in my “20 Momisms Translated” post, we moms have a lot in common… why should this be any different?

Back in the day, I was late because of the normal stuff, you know, my hair didn’t look just right, my alarm clock didn’t go off, there was traffic on 95… Now, between me barely keeping my head on straight and my kids being out of their minds, my excuses look more like this:

2. All of a sudden, none of their shoes seemed to have a mate. NONE.

4. My kids were fighting over who got to sit in which seat.

5. My daughter’s fingernail was itchy.

6. My son decided to wrestle with the dog rather than simply walk out the door, so we had to roll off the fur, but I couldn’t find the lint roller, so I had to fashion one from masking tape and MacGyver it off.

7. Both my children had to make a last-minute poop.

8. It seemed like a good time for one of them to ask where babies come from.

9. There was a wardrobe malfunction that led to wet underwear and a much-needed last-minute bath.

10. My son skinned his knee walking to the car.

11. My kids got suddenly parched, which led to drinks, which led to snacks. So we’re here to meet you for lunch, but frankly no one is hungry.

13. My daughter decided this would be a good time to have a meltdown over something that happened hours ago. Did I say hours? I meant days.

14. My kids were fighting over who the dog loves more.

15. My son remembered that he forgot to do his homework.

16. It seemed like a good time to ask about puberty.

19. My daughter’s underwear was too “elastic-y.”

22. My kids were fighting over what radio station I would get stuck listening to.

24. It seemed like a good time to ask about homosexuality.

25. My daughter changed 13 times until she felt she was wearing something that said, “I’m fashionable, but not so chic that I can’t meet someone for fro yo.”

26. We couldn’t find the cat, she was sleeping in the cabinet with the pots and pans.

27. My kids bumped heads getting into the car.

28. My daughter realized she forgot to put on underwear and she was wearing a skirt.

30. My kids were fighting over whose tongue is longer.

33. My daughter wanted to draw this picture for you. You better love it!

34. A stuffed animal that we haven’t slept with or seen in months was noticed to be missing as we exited the house. Lost signs needed to be made, the milk carton people were alerted, and we ransacked our home to find it.

35. My son fell out of the car while getting into the car.

BE AWESOME, SHARE/LIKE THIS POST
BE AWESOMER, SEND ME APPOINTMENT REMINDERS!