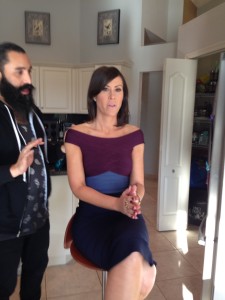 Hairdresser having just cut and blown it out. It’s not bad, right?

The other day I got a haircut. Ry (my 10yo daughter) got in the car and simply said, “hair cut.” In a robotic, I see you got one, so I’m making an effort, but this conversation shall go no further, because I’m pretty much a teenager already, kinda way.

Me: Human child. (I said robotically, pointing out the obvious, in kind.)
She picked up her iTouch and disengaged.

Me: I always tell you not to say mean stuff.

Ry: Yeah, you also  tell me if I don’t have something nice to say, not to say anything at all, which is what I was trying to do. (There was no, “duh” at the end, but it was implied.)

Me: For your information, my hair hates you too. (I said in an effort to have a convo one of the other personalities in my little “Sybil,” which they all become somewhere around 3 years old.)

Ry: Whatever.
Then I made a crying sound. (Oh, I will not relent.)

Ry:  K (She said, in the way I imagine Miley talked to Billy Ray when he would threaten to take away her allowance if she didn’t clean your room. Actually, that conversation may have been the other way around, but you get the point.)

Me: What what did you say?

Me: Shhhh shhh, I can’t hear Hair, she’s whispering… (Oh, I know how to play this game) … No, I don’t know what happens when a curling iron, a flat iron, and a crimping iron walk into a blowdry bar??? *huge laughter and knee slapping*

Me: You’re right, that is the funniest joke I’ve ever heard. *laughter laughter*

Me: Are you serious hair? Did they arrest her?

Me: Yeah, I know a bail bondsman.

Me: Who said, that? Oh Ry, you’re still in the car? I totally forgot, I was son enthralled by Hair… She’s hilarious. I’m sorry, hairlarious. Hair just told me to say that.

Ry: That was so corny.

Me: Hair, knows.  She was being ironic by saying something corny because you will never get to see the true depth of her humor.

Me: Fine no more hair talk.

6 thoughts on “Kids with Attitudes are So Fun: Random Conversations”