Yes, I have problems sitting on the “sick side” of the pediatrician’s office. Yes, I assume the person before me at every restaurant, arcade, amusement park, and grocery store shopping cart has picked their nose and wiped it somewhere within reach. Yes, I’ve experienced the catch 22 where I want all tables wiped down before I’m seated, but have also convinced myself that the germs spread from those over used rags are far worse than the left over food residue that currently contaminates the space.

I think not. After talking to a few friends about poultry, my worst phobia, I realize that I’m a member of a very large crowd. A very large, very disturbed crowd. 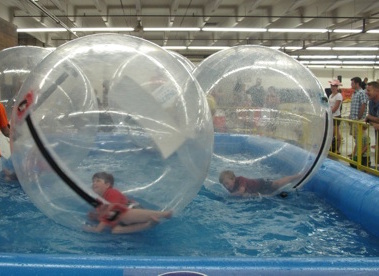 Then I met the Bubble attraction, which in my opinion may be the worst offender of them all. Seriously, who thought of this petri dish in the first place? For those of you not lucky enough to have encountered the Bubble, it’s a clear plastic beach ball that rolls on water and can fit someone up to 150lbs, though I saw teens much larger attempt to walk on water at the local Party Playground.

This is how it works: you pay a fee to have your child stuffed into a plastic bag while a man with no more than 7 teeth shoves pumps stale air in to inflate it.

Hypocritical? Well, I did just spend the last 6 years saying, “NEVER stick your head in a plastic bag” and now I’m like, “Well, if the toothless guy says it’s okay, go for it.”

There’s something suffocating about watching a child crouch into a plastic bag in the first place. Once I got past the creepy metal images, I  found myself daydreaming about how I could use this evil ball for good, like how it could be the best babysitter ever.

Yes, in the midst of all my anxiety, I imagined how cool it would be to have my own CLEAN bubbles… for when I have to work to do or when I have no patience to entertain a playdate or to get my kids worn out before bed.

Unexpected visitor and you have work to do? No worries, simply stuff em in the Baby Sitting Bubble and send them out into the pool to bang into each other and hamster around for an hour.

Brilliant right? They can’t go anywhere, everyone would be happy, work would get done – But then it dawned on me that there’s probably only so much air in that bubble. Ugh, chest tightening feeling at the thought of forgetting to set them free. Forget it; I’d rather miss my deadline.

Back to the party. Sure I could have opted not to let my daughter go, but every other mother at the party seemed quite OK with it, making me yet again, neurotic mom of the year. No, this time, I would seem cooler than that, though I’m sure the nail biting I was doing as my my daughter waited, gave me away.

As my baby entered the bubble, the hand sanitizer I so diligently carry in my bag actually committed suicide. It knew it could never disinfect a child after such a feat and jumped from my pocketbook splattering its last ounce of dignity on the Slushee stained carpet. I was in this alone. I looked down at that sorry tube of Purell and wished I had the forethought to have brought a can of Lysol instead. Let’s face it, my child was not the first to enter this ball, no she may have been 10th person in that bubble in the last hour. A bubble which at no point contained an attendant holding a bottle of Windex and some paper towels.

To make matters worse, shoes and socks weren’t permitted. I was told this was for sanitary reasons (bwahahahaha). Nor was there an internal release of any kind, well, if you don’t count the electrical tape patches sprinkled about. You know what was allowed in the “germosphere?” Runny noses, coughing, falling on your face where the last kid or drunk adult’s feet left sweat marks, their butt left crack marks or any orifice left any residue of any kind. Yep, those are the rules. Have fun while crazy moms, like me, try to figure out where they can give you a “Silkwood” style scrub down when you get home.

As luck would have it, my anxiety was interrupted by another stress inducing revelation. SHE’S WEARING A DRESS! Come on, really? I realized as Ry crouched in her bubble that she in fact was the only child at the party in a dress, in other words: we were about to get a peep show at my six year old’s Justice undees, which I fear is the very reason every childless adult in the joint was there in the first place.

Look, if you go to a party/entertainment center that happens to serve beer and you don’t have a kid in tow, you are without a doubt flagged on a data base … and you wonder why you never get any trick or treaters? I stood with one of the dads who was equally as horrified at the germ fest and when I revealed my newest concern he burst into laughter and then pointed out at least two childless men sipping beer by the end of the pool. I spent the next 7 minutes and 15 seconds giving the international sign for “Close your legs.” A sign that many young starlets would benefit from learning. My proper princess understood immediately, which either means she is really good at charades or we need to talk more about sitting like a lady.

When my little LiLo was done with the ride, I was able to focus on the germs again. Phew, I was worried I had forgotten to worry about that. I considered hosing her down at the sink, but it was time for pizza and all the kids, unsanitized, unbaby-wiped, un-dragged to the bathrooms by insane parents ran joyfully to the tables and drank their hydrogenated, high fructose corn syrup filled fruit punch and licked their fingers… and mine did too.

Like my bottle of Purell, I had given up. As one of the moms who let her daughter ride in the bubble 5 times said, “They have to be exposed to this stuff or they get the allergies.” I don’t know if I agree with that logic, but the part of me that wanted to tell her she was being a bit of an extremist realized we may have more in common than I’d thought. So, I shut up, ate my pizza without patting off the grease with a napkin and enjoyed being a renegade for just one night.

5 thoughts on “Do I Win Neurotic Mom of the Year or Would This Make You Insane Too?”