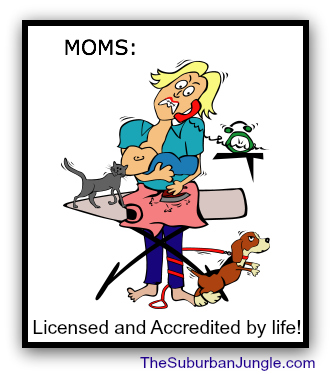 You need special credentials to drive a car, take out a book and get a credit card, but there are no prerequisites to raise a child?

As a fairly normal adult with the means to raise a child, I admittedly had no clue what I was doing with my first child. I remember leaving the hospital thinking, He’s mine? I own him? You guys trust me to walk out that door and raise a child because I made the obligatory poop and demonstrated my ability to put him in a car seat?

Isn’t it baffling that everyday people like us are allowed to procreate without first passing a test or getting some kind of license? Think about it. You need a library card to take out a five-dollar paperback, because you can’t be trusted to return it in a period long enough to read it four times over. You’re also required to pass a test to drive a car, sell a house or be a lifeguard. You can take a class to learn how to give birth, but once that baby’s out, you’re on your own.

There wasn’t even a test at my OB’s pre-pregnancy interview. All he asked was, “Do you have insurance and are you taking folic acid?”

“Of course, I’d never think about bringing life to this Earth without the recommended 3 gagillion mgs of folic acid per day… I’m also shooting heroin, but you didn’t ask me that.”

What if I don’t feed him, bathe him or water him? I could let him swim after lunch without waiting the mandatory 30 minutes, or dress him in generic clothes from the supermarket. I could drop him off on the first day of middle school, roll down the window and scream, “Mama loves her Snuggle Buggle!”

At the very least, there should be some kind of “Mommy Aptitude” screening. During your interview, they could call your mom. Mine would say,

“Jenny always dreamed of being a mother and loved playing house. Her dolls were mostly naked, and she liked to cut their hair down to the hair transplant plug scalps. Sometimes she would detach their limbs and try to put them back in the wrong sockets, possibly to amuse herself, though I found it rather disturbing. Have I said too much? No, really, she would be wonderful. They would be so clean; I recall how much she liked bathing her naked Barbies.”

Doctor’s response: “Put in a 10-year IUD, give her supervised visitation with a hermit crab, and make sure someone counts the legs.”

Not only do gynecologists promote the concept of “Motherhood” to anyone donning a wedding ring with reckless abandon, they encourage us to have more. Otherwise known as repeat business. The second my daughter arrived, my OB said, “So, when am I gonna see you back in the saddle?”

Great, a stirrup joke. “Take it easy Doc, the placenta’s not even cold yet.”

Well, a month and a half later, I ran into my OB again. Actually, I had an appointment, so it wasn’t as random as I’m making it sound. He said, “At six weeks you are extremely fertile, so now is the time for another romp in the stable.” I immediately went home to tell my husband the doctor said, “Now is the time I am extremely unstable, so no romps for at least six more weeks.”

How about a probationary period to see if you’re any good at this parenting thing? When you get a new job, they evaluate you every six months. They certainly don’t give you more responsibility until you’ve proven you can handle your current load, unless you work at McDonald’s.

How does my OB know how I’m gonna solve disputes? When my children are fighting over the last lollipop, who says I won’t shove them all in the closet, lock the door and say, “Last one standing gets it”?

Well, lucky for me, I’ve turned out to be an excellent mother (ask my children), regardless of not being licensed and accredited.

(Please note: this is meant to be a mom humor piece… Though I wouldn’t be opposed to some “What Do We Do Now That We Had The Baby?” classes)

XO Jenny From the Blog

Other Fun Pieces: 40 Things Every Woman Should Have or Should Know by 40

Moms of Boys are Jealous Shrews, So Here’s a Contract for Your Future Daughter in Law

Subscribe to The Suburban Jungle (it’ll put hair on your chest).