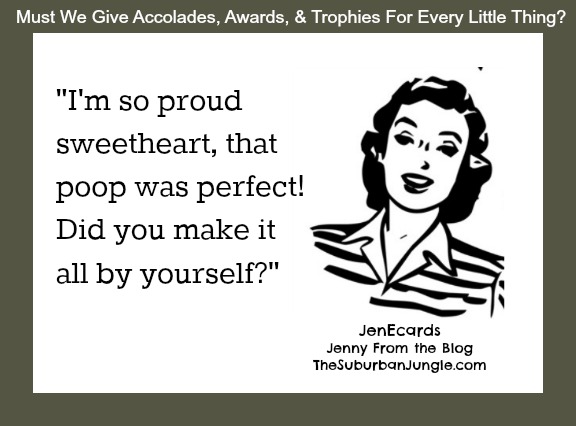 At 3, my kids received trophies for soccer, which I assure you were not deserved. How do I know? Um, there were times my daughter would stop kicking the ball to chase a dragon fly. And, I could be wrong, but I don’t think my son was bending it like Beckham when he would pick up the ball with his hands and throw it to a friend mid-game.

I know, it wasn’t about them deserving their awards … all the kids get trophies for simply showing up to the ceremony — because that’s what we do to our millennial children, we make them think that they’re the best at everything. We praise them constantly and tell them everyone is a winner, leaving them little motivation, little idea of what the real world is like, and little chance of not freaking out when they realize they aren’t perfect.

My kids also have grandparents that kvell over their every move.

“Wow Jenny, I think Ry is going to be a ballerina, she’s so graceful.”

“Mom, she just tripped over another child.”

“Yes, but did you see the way she broke her fall? Flawless.”

“Wow, did Jake make that poop himself? Why, it looks like the Virgin Mary. Brilliant.”

My daughter fully believes she sounds like Beyonce, because frankly, no one has ever told her otherwise. She’s also pretty confident the mismatched Punky Brewster stripe on stripe outfits she puts together will one day be her ticket to a career in fashion design. We’ve all spent years marveling at her ability to whip up these ensembles that are so “modern” and “fashion forward” (which are nice ways of saying they clash so strongly they may cause seizures).

As my kids have grown, we’ve laid on the praise (thick). G-d forbid they feel unnoticed or lessor than any other child that has a trophy ceremony at least once a season. But, lately I’ve tried to make an effort to tell them when they aren’t good at something, because at the rate we’re going, my daughter will be waiting for her acceptance to Harvard (where she’s informed me she will be attending) to come to her without ever having to submit an application. No, it shall come hand delivered … by the dean … who no doubt will have learned of her design prowess, spelling abilities, and silky voice from Instagram and YouTube.

This is why I was so happy to tell my 11yo son he’s a bad artist. Yep, I said “bad,” frankly I may have even said “crappy” or “sucky.” And unlike his soccer trophy, he totally deserved it. He arrived home with a charcoal picture of a tree. But really, it looked more like a Rorschach test. A Rorschach test that looked so little like a tree they would commit you if you suggested that’s what you saw.

My mother-in-law, who happened to overhear my comment, immediately came to his defense, “It’s not bad, it’s abstract. Who would think to draw a tree shaped like a pear? And the squiggly lines give it so much movement. It’s genius.”

“It’s not genius.” I retorted, “He was trying to draw an actual tree. This is not his interpretation of a tree in a a hurricane being eaten by a snake, it just looks that way!”

She looked back at me ready to fight his case, but he just started cracking up at my analysis, “Thank you for not trying to tell me I’m sooo artsy.” “You’re welcome,” I said making a face at his ugly tree as if to say, how could I, when you bring me home this junk? (He enjoyed the sarcasm and a well placed wink.)

What happened next is kind of insane, so prepare yourselves. Are you ready? He didn’t fall to the ground in tears, his chest didn’t sink in defeat, his ego didn’t implode, he actually seemed happy we had this understanding and he went on with his day, as if I hadn’t dealt him that crushing blow. I mean, he’s been told he’s brilliant at everything for over a decade (and he does a lot of things really really well), but it’s nice to allow him to not be good at something that he already KNOWS he’s not good at.

Score one for the parent!!!

Now, I’m off to tell my daughter all the things she sucks at and when I’m done, I want my parenting trophy?

26 thoughts on “Enough With The Freakin’ Awards – Should Our Kids Get Trophies For Everything They Do?”