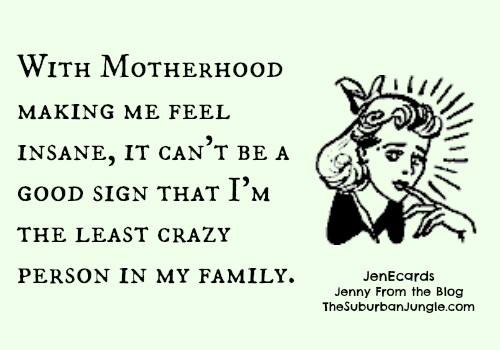 Do you ever have certain feelings about motherhood, like: Is it supposed to make me this crazy? How am I supposed to be able to think on this little sleep? How come it affects my ability to have a rational thought or conversation … or my ability to shower on a regular basis? Yeah, me too … I usually have those thoughts after conversations like this:

Mark: I think the kitten in the microwave.

Me: Really? I know it’s odd that she jumps in anything that’s opened, but she’s a cat. J is an 11 year old human.

Me: So then you smell her too?

Me:  Then how would you know? It’s not like she’s perfumed, you have to basically mush her fur up your nose to get a whiff.

Mark: How would YOU know?

Me: ‘Cause I’ve smelled her too. (I’m beginning to think the poor cat feels violated by my family constantly sniffing at her, not to mention the dog who sniffs her at the other end.) For the record, she does smell good, but I only smelled her because J smelled her, and I wanted to see why he was smelling her. I’ve smelled the cat for the reason most people smell cats … research.

Mark:  I have a feeling people don’t smell cats for research.

Me: Well, it’s a better then being a cat smeller like you … and now your offspring smells cats, I knew you would genetically screw things up somehow. I hope you’re happy.

Mark: First of all, I don’t think there’s a gene for cat smelling. Secondly, I’m not a cat smeller. I’ve only smelled the one.

Me: Really, that’s like saying I’m not a murderer, I’ve only killed that one person.

Mark: No, it’s actually nothing like that. It’s simple – she’s soft and sometimes when I put my face in her face I also have to breath and that is the extent of my cat smelling habit.

Mark: Yes, and he smells good too. We have soft animals that smell good, we’re very lucky.

Please tell me if you’ve ever smelled your pet (I need a way to justify the crazy in my house)?

Go ahead, share this with anyone who needs a reminder that we’re all insane!

11 thoughts on “Motherhood Feeling: If I’m the Sane One – I Must Be Losing My Mind”