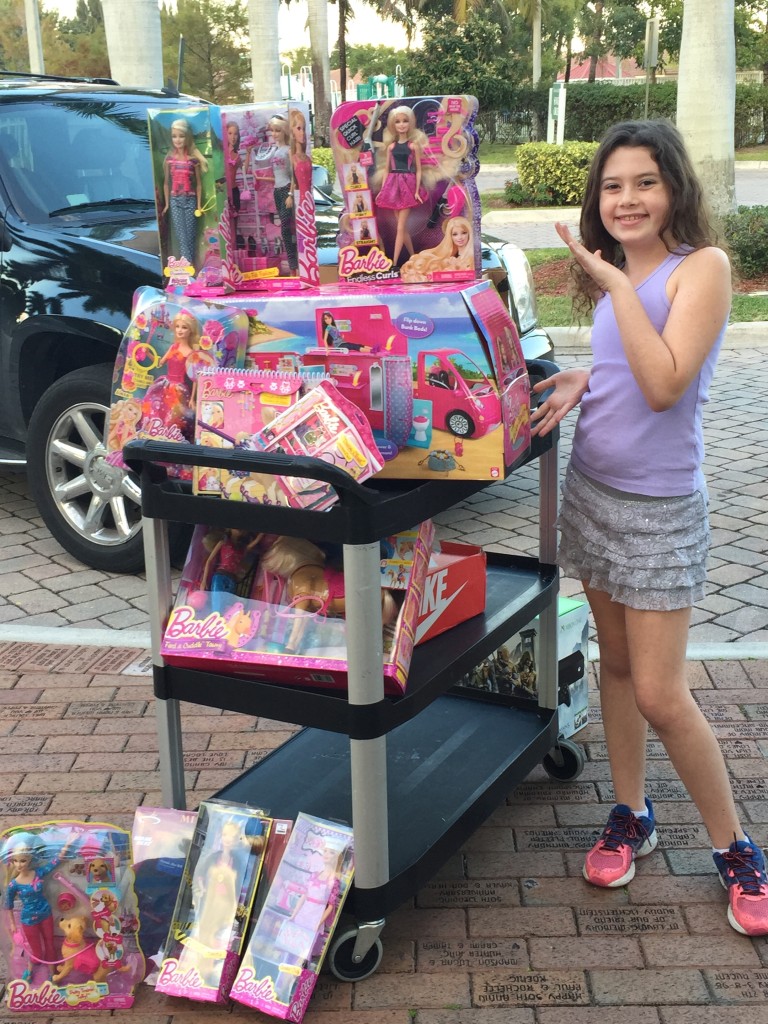 To ring in the New Year I asked my children what their New Years Resolutions would be and Ry’s was three things: 1. Get more of those comfy sweats made of that stuffed animal like material. 2. Play with dolls more. 3. Be more charitable.

I’m not quite sure if she totally understands the whole New Years Resolutions thing, as the first two seemed a bit more self-serving, but the third more than made up for any lack of understanding. In fact, hearing her utter the third, gave me chills. You see, over the holidays, my son had to do a Mitzvah project for his Bar Mitzvah. Usually this involves the parents doing a charitable project and the kids showing up for a day of pictures, a charity walk etc. but J wanted to “adopt” kids from a local orphanage for the holidays.

Yes, I said adopt, but really it means the children of JAFCO get to make out wish lists and we get to fulfill them. Then they have a huge party and open presents together.

Also, I said orphanage, like in Annie, but I’m pretty sure they do more than sweep and sing. There actually is one around here which happens to be for children who are homeless due to abuse, neglect, or because their parents are unable to care for them for some reason or other. It also happens to be the only one of it’s kind — for Jewish children, which means they get to keep their religious identities, traditions and upbringing, which is probably pretty rare for Jewish children who end up in the system (well I think they call it that, they do on CSI Miami).

As you know, I’m part of the Barbie Project — I told them about the charity (in case they wanted to donate anything: irregulars, discontinued Barbies…anything). They sent huge boxes filled with the most amazing new dolls and accessories. Ry tore into them, thinking they were a care package from Mattel, and ran over to me joyously, so I could McGyver them open with a crow bar, but not this time — they weren’t for her. I explained that they were for orphans and she cried.

Yeah, that’s a sentiment I just wrote in words – I told my “sweet” little girl the Barbies in her hand were lovely gifts for orphaned children who have very little — and she cried because they weren’t for her.

Look, it’s easy to relay statistics of poverty and the plight of those with no food or shelter to your kids while sitting on a cushy sofa in a perfect 74 degree room, but it’s not easy to show them the reality of it.

These Barbies, that were going to some so called “Orphans” would be just as happy in Ry’s Barbie drawer, she was sure of it. So, I decided to bring her along with J and I, as we shopped and picked out gifts for the kids of JAFCO, according to age, requests, likes and height (of course). At first, it felt more like helping shop for a friend’s birthday present, with the usual sprinkling of “Can I get that too?” Did I say sprinkling? I meant whining, crying, and begging on knees in the aisles of the Super Target.

But then we found ourselves getting stuff on their lists like: Socks, calendars, body spray, and craft supplies. And this happened:

Ry: “Why are we getting socks?”

Ry: “Well are they special socks?”

Ry: “Nooooo Mom, like some kind of cool socks that have a separate area for each toe?”

Me: “Nope, they are just regular socks that cover all toes in the same tubey cotton foot thing.”

J: “Ry, some of these kids have nothing. They put socks on their list because no one is there to buy that stuff whenever they need it.”

I think this blew her mind, because she didn’t ask for another thing, well, except socks, which she totally needed anyway. I reminded her how easy it was to get said socks. You ask for socks … or water, or shoes, or crayons and you get it… and she told me she wanted to help us bring all the Barbies to JAFCO. Plusssss, when we did get an actual care package from Mattel (for the holidays) she asked to donate that as well, rather than keep the cool stuff they sent just for her. 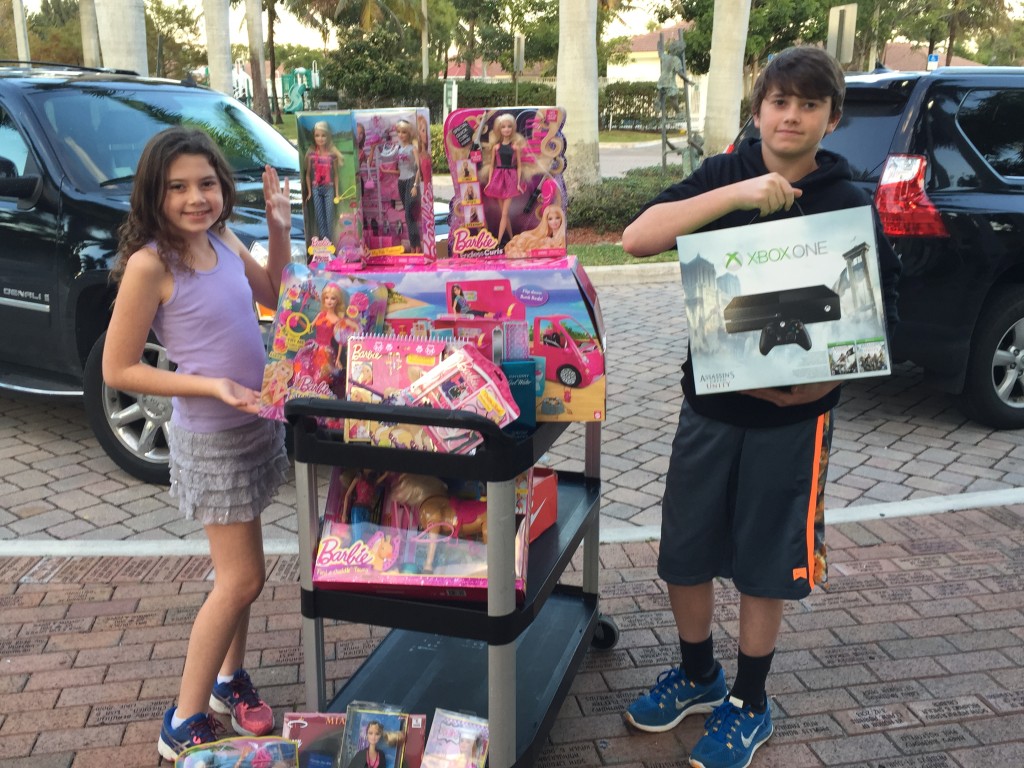 We did deliver the stuff to JAFCO and when we got there, we were told we couldn’t meet any children or stay for the party, as they are very protective of their identities. I understood, but was also sure all my efforts would be wasted, since there would be no putting faces to gifts, no “thank yous” or even seeing a child’s eyes light up.  However when we left she said, “Mom that felt so good.” Seriously, she said it out of the blue, perfectly place, like someone handed her a script. (I looked around, there was no one holding cue cards.)  She was right, it did feel good, and Ry noticing that feeling, getting to have that feeling… felt great. 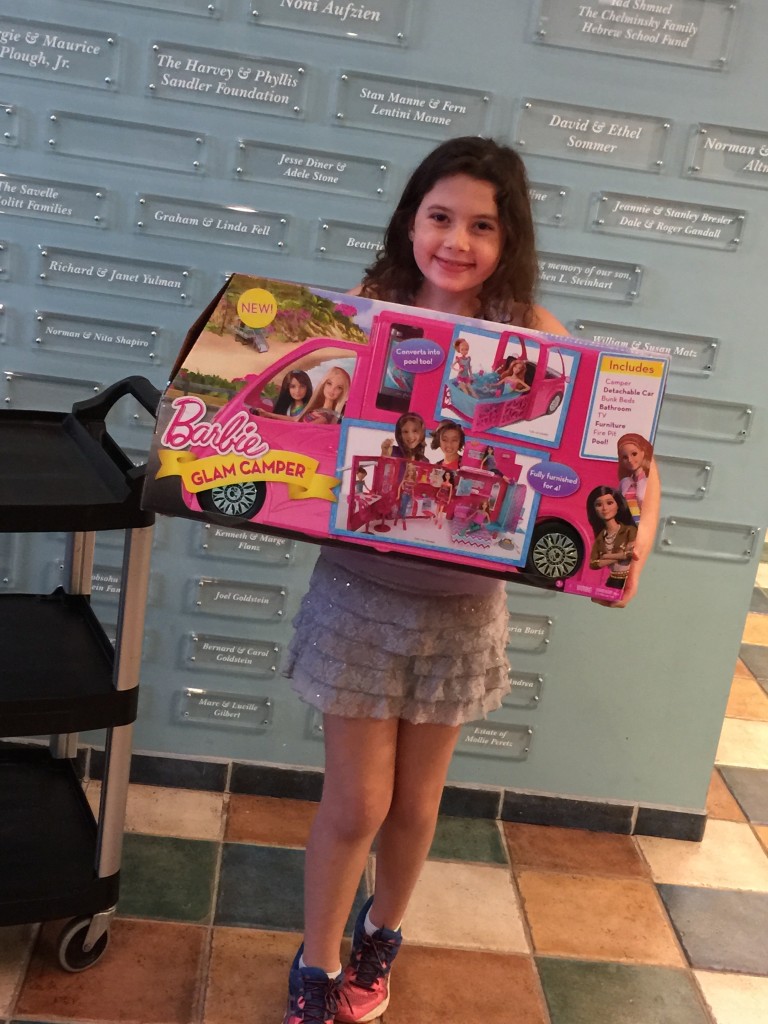 That is real happiness to NOT take that item home!!!

Which is why this year my resolutions are 1. Spend more time playing dolls 2. Eat less carbs 3. Be more charitable. 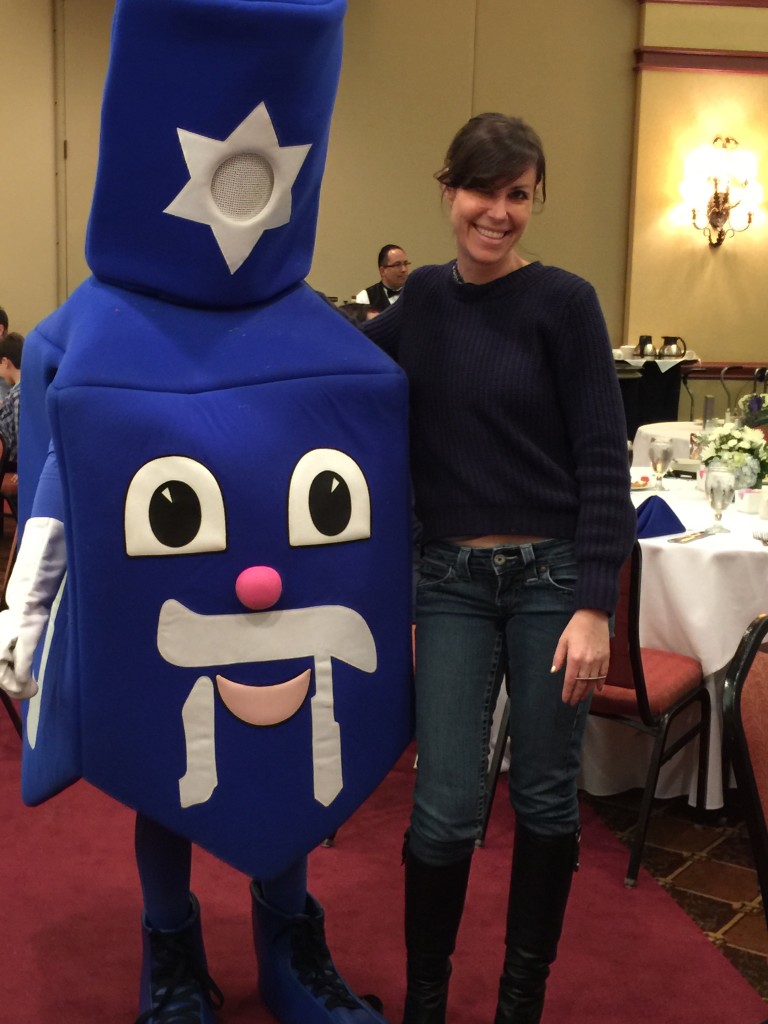 Though we didn’t get to meet the children, we did meet this Dreidel at a holiday party later that week. It was pretty scarring!

Thank you Barbie for the lovely donation that I’m sure made many children happy and for letting me be a part of the Barbie Project. Over the course of this year it has helped shape Ry into a pretty upstanding little kid (with Barbies to spare).