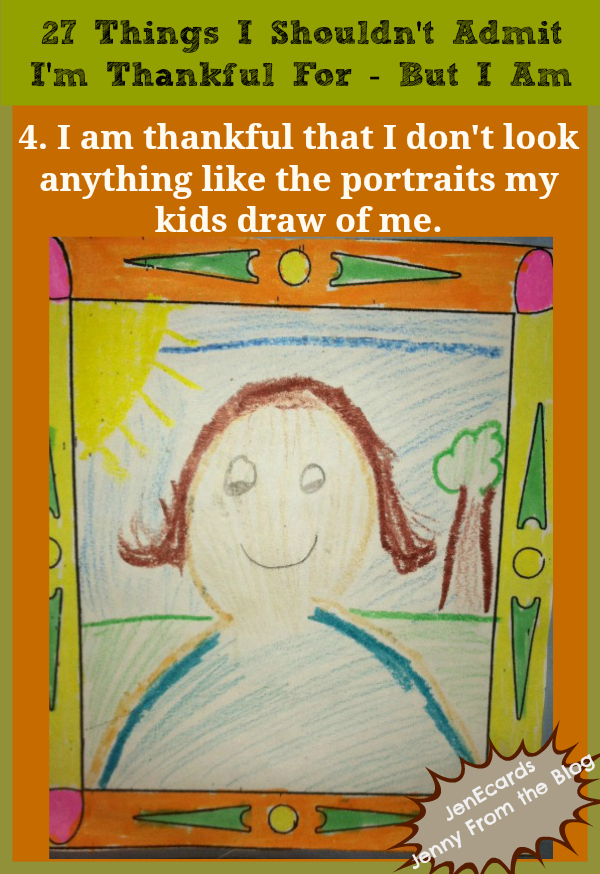 Yesterday, I was sent a group Facebook questions asking me to name one thing I’m thankful for that isn’t cliche or traditional. Other people tagged in the post were coming back with beautiful sentiments about new friendships, the help of strangers, and averting disasters, which in my opinion wasn’t really following the rules at all. If that’s not the traditional stuff, then what is?

I didn’t respond because everything I thought of seemed trite, superficial, and a tad less profound – even though I’m pretty sure that was the point. Whatever, facebook people who don’t follow directions.

So, I did write a list because these things totally deserve thanks in my book — just refrain from saying them around the dinner table. END_OF_DOCUMENT_TOKEN_TO_BE_REPLACED

I know he seems more angry than "blushy" but YOU try and get a picture of him embarrassed!

This post needs to be filed in the crevices of my mind where repressed memories are stored and then covered up by something to obsess about, like my cellulite, or the wrinkles on my face that multiply faster then the Duggar family.

Maybe I could slide this memory somewhere between my talent show version of Gonna Dress You up In My Love and my entire 7th grade year.  Well, here goes…Recently at a baseball game, a mom friend and I were having a bout of witty banter that went terribly horribly irrefutably awry.

Me and this chick were joking about a penchant many women have to bedazzle everything. Frankly, I don’t know how every word on their t-shirts is bedecked and bejeweled or how they have so many extra gem filled grommets and studs on their jeans, their sweats, their shoes, their handbags, their children, and their cellphones.  I just know that the glare makes it hard to look in their direction for fear of burning a retina.

Amy: Jenny, why don’t YOU have anything bedazzled?

Me:  My belly-button.  I have one of those sticky diamond tattoos in the shape of a baseball.  It helps me get into the game.

Amy:  You could tie your t-shirt southern style to show your support for your team.  The dads would love that.

Me:  No, I like to take the shirt from the bottom and pull it up through the neck hole.  You know, camp style? The dads will definitely enjoy that one ‘cuz a boob inevitably falls out.

Amy: And then your hubby could bedazzle something for the moms.

Me:  Yes, his penis is bedazzled to look like a bat… and when Jake’s up, Mark runs over and whacks me on the stomach with it and we all scream “Go Jake, whack that ball.”

Oh, it went there.  There was no stopping this tacky reparte train, but what happened next turned said train into a locomotive careening off the tracks. I turned towards my hubby who was sitting on the other set of bleachers and screamed, “Mark, come on over here and show Amy your penis.”

Let me tell you two things in my defense.  1.  I meant to say “bat.”  “Mark, come over here and show Amy your BAT.”  You know, joke joke, wink wink, snicker snicker?  No harm done. No children traumatized for life.  2.  There were about 10 kids all aged 9 a row in from of us on the bleachers. ALL of which turned around and stared me right in the eye!

Amy looked at me, mouth agape.

Me:  Did I just say what I think I said?

Kid on bleachers:   Did you just say penis?

Amy’s son:  Why do you want my mom to look at Jake’s dad’s penis?

That is perhaps one of the most horrifying questions I’ve ever been asked.  I can still hear it my head as if said in slow motion through a Darth Vader mask.

Amy’s son:  Continuing without pause, “Why would you say that?”

Oh G-d, a question worse than the first, which was punctuated by 10 sets of impressionable eyes trying to stare the answer out of me.

I looked to Amy who was giggling so uncontrollably she could barely stop long enough to say this: “Yeah, why would you say that?”

After what felt like an eternity.  I replied, “Did I say penis?”

Me:  Hee hee hee (fake laugh with snort added for good measure) Nooooo, I meant peanuts.  Your mom was hungry and I wanted Mark to come share his peanuts.  I can’t believe it sounded like that.  That’s so funny, right?  Hee hee ha ha ho ho snort.  Right?

“Ohhhhhh well it sounded like penis,” said the spokesperson for 10 inquisitive kids who enjoy nothing more than the mention of genitalia, diareah, or a good fart joke.

Me:  Just me crazy accent.  Dunt chew knaw? Yes, that was supposed to be “Don’t you know” and it was said in a desperate mix of Jamaican, Irish, and Bostonian with a dash of Catherine Hepburn.

Amy looked at me sidesways as if I was having some weird speech seizure and 10 disinterested kids turned back to watch the game.

Note to self: NEVER talk to Amy again and stop bedazzeling Mark’s penis!

You know the sites: Hautelook, Gilt, Zulily, Ideeli, Rue La La? There’s addiction in my family, so was no surprise that I would fall prey to the gene. For years my father feared that I would pick up some bad habit or other: pour the sauce, pop the pills, ride the cocaine train, squeeze the juice (okay I made most of that up. I’m not privy to the colloquialisms of drug users, but it sounded good right? Maybe I could get the last one to catch on with steroid users. “Brad looks so buff all of a sudden.” “Oh, didn’t you know, he totally squeezes the juice.” Okay, I digress. END_OF_DOCUMENT_TOKEN_TO_BE_REPLACED