END_OF_DOCUMENT_TOKEN_TO_BE_REPLACED

Why do we need to “know our vaginas,” anyway? I’m happy keeping mine at arms length. Yet, I’m told we should be more acquainted. I have to be honest, I think we’re good, me any my hoo-hoo, that is. I’d definitely miss her if she wasn’t around, but we’re not conversing during long walks on the beach, though we do like to take them (so we have that in common — which is nice).

Could you pick your va-jay-jay out of a va-gyne-up?

Recently, in the pediatrician’s office, I was reading a pamphlet on puberty. Please, it’s better reading than an outdated TIME, or a Highlights where all the hidden pictures are already circled (and they always are). Anyhoo, it suggested that ‘tweens (I’m assuming that’s who it was for) should and I quote, “GET TO KNOW YOUR VAGINA.”

If there are any preteens reading this just know, you shouldn’t be — now, go google One Direction and stop reading my columns.

I began to think about how WE were schooled on puberty. Oh, those awful videos that hadn’t been updated since the 60’s and 70’s, so the people still had combs in their back pockets, bell-bottoms, and afros. I don’t remember the exact details, but I know most were grainy, some slightly resembled School House Rock, and I’m pretty sure one of them convinced me that you could get pregnant from dry humping — if the guy came — which I’m pretty sure no cool guy ever did.

Don’t get me wrong, I’m certainly no “dry hump” virgin. Nope, I know more than a thing or two about the friction caused by two pairs of button fly jeans rubbing uncomfortably against each other, on a waterbed, the bucket seats of a Nissan 300ZX, or the ultra-suede of a basement sofa. Look, I’m a Gen X-er, that’s what we had. Also, I was a good girl (who liked to fool around), which means I was forced to be a “dry hump” slut.

For years, I was convinced that sperm, being so powerful and microscopic, could travel through a guys boxers and Z Cavaricci’s and past my Guess jeans and little Bloomies straight into my cervix. This may be a sign that I didn’t know much about sex… but at least I was on trend.

See, we weren’t told to get to know our vaginas. In fact, I’m a bit concerned that at nearly 40 I don’t know my vagina at all. Frankly, I couldn’t pick her out of a line-up. Seriously, could you? I mean, I could probably narrow it down, like they taught you to do in SAT prep, but any vagina with the same grooming, coloring, and general size — could be mine. How sad is that? I don’t even know if my vagina has any defining marks, characteristics, or other traits that make it uniquely my own.

To make matters worse, the pamphlet may have mentioned that each vagina has a distinct personality. WTF is that all about? She has a personality? Maybe we should be conversing more, I haven’t the foggiest idea what she’s all about. Is she saucy, shy, extroverted? I don’t freakin’ know. I mean, I know she’s obstinate, yet easily swayed. That counts, no? She’s highbrow, well groomed, extremely particular, and yet, I like to think she’s adventurous.

My vagina is a flippin’ onion, so many layers. How could anyone claim to truly know her? They, you, I… we couldn’t, so stop trying.

Do you hear me people? I’m saying back off — give my vagina some space. (If I had a nickel for every time I used that phrase…)

And you pamphlet writers, who are either men making a ridiculously misguided attempt at feminism or clueless guidance counselors disconnected from modern ‘tween society, could you work on being a bit more creative? Telling teens to get to know their vaginas and expecting them to take it seriously, REALLY? That’s fodder for parodies. In fact, all I could think of, while perusing your literature, was the SNL skit “You and Your Uvula,” which I’m sure dates me even more than the School House Rock reference. If you must tell girls to get to know themselves, at a bare minimum, slap a picture of Justin Bieber on the cover. 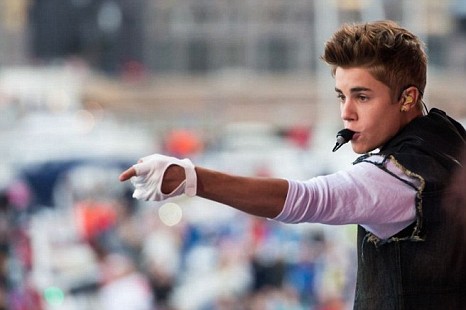 YOU, should get to know your vagina!

Most importantly, after pondering this piece and spending some QT with my vag — you know, dinner and a movie, non fat no foam lattes at Starbucks, a raucous round of kegals, panty shopping… I’ve found vaginas, like their owners, are complex creatures, who deserve the right to be themselves, to roam free, to explore. That’s right, we not only deserve better pamphlets, but free range va-jay-jay’s as well.

Ones, who don’t need to be pigeonholed into one personality trait, but can be all things at once (just like us): Happy, sad, elated, shy, giddy, self conscious, confident, and insane.

Have you never seen a woman simultaneously laugh and cry during an orgasm?

I rest my case.

PS – Take a good hard look at your va-jay today, it would be really embarrassing if she ever got arrested!