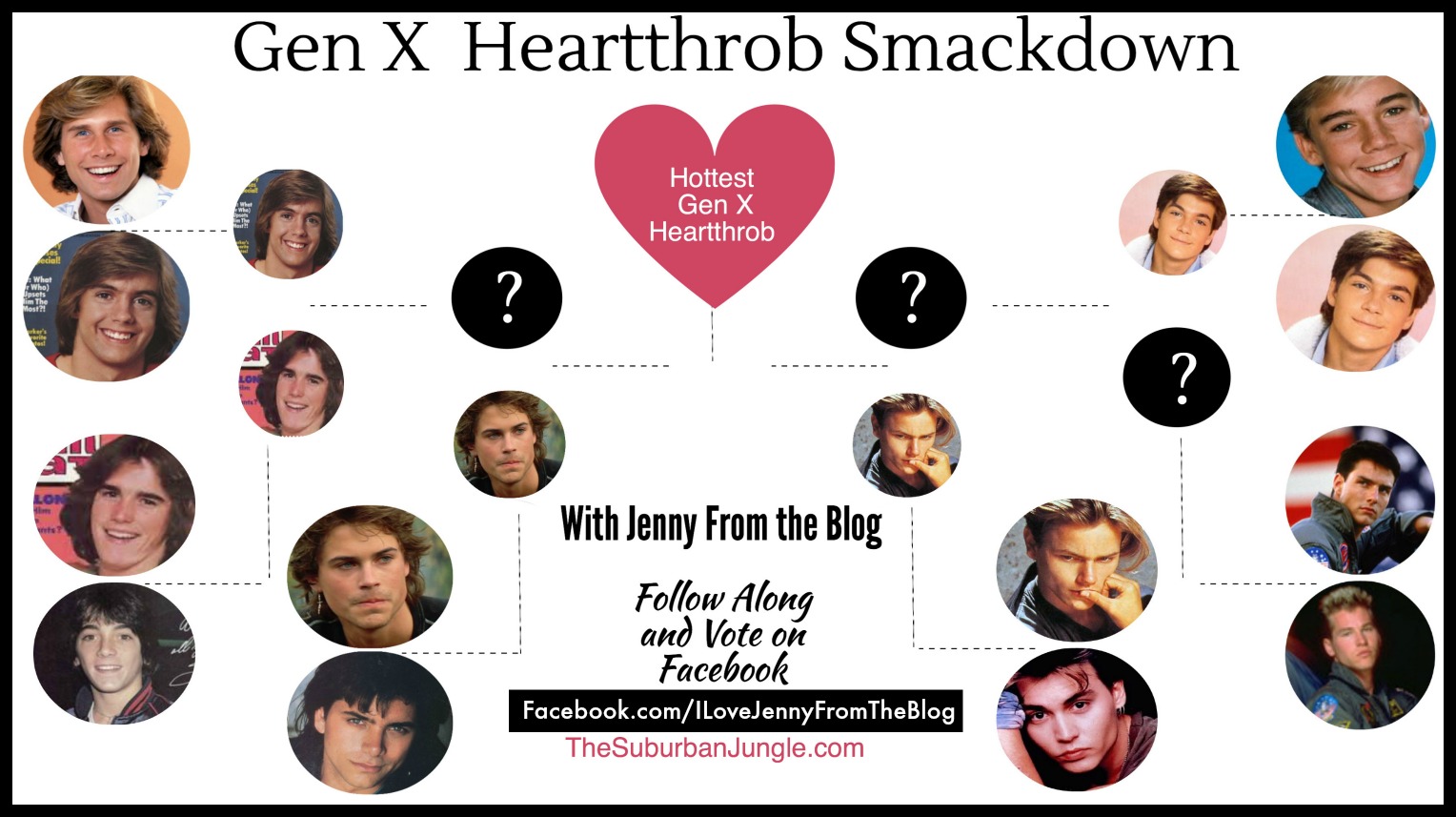 This week on my Facebook Page, I’ve been having a Gen X Heartthrob Smackdown (sorry to my male non-gay readers). Anyhoo, I’m doing it because I’m tired of seeing my hub and his friends have all the fun with their NCAA brackets … and also because I’m bored.

SO far, ROUND ONE is almost over and I thought I’d give you a quick recap and suggest you go vote on upcoming head to heads or cast votes now on links!

Shaun (da do run run) Cassidy – the guy who along with Leif Garrett lined my walls. The one who made me wish my name was Jill … Vs. The bright eyed, pearly toothed preppy, Parker Stevenson whose perfectly feathered hair made Farrah jealous!

RICKY, ahem, Rick Schroder. Who had me smitten while sobbing over his dad in The Champ saying “Get up Champ, get up!” It’s rough to even write… Before he went all Rick on us, I dreamed of making out with him on his race car bed (you know you did too!) Vs. The adorable Jason Bateman, who I watched through Little House, It’s Your Move, The Hogan Family blah blah – Arrested Development. He’s currently more adorable than ever (but that doesn’t count).

Scott Baio, who I may not recognize without a staple in his belly button (he’s the reason I wrote Why I Made Out With Posters in The 80s). He was the guy I was pretty sure I would one day marry… Vs. Matt Dillon, the hot bad boy. I fell in love with him when he was a dick to Kristy McNichol in the boathouse and there was no turning back.

Pairing 4: Tournament of the Deep Thinkers

River Phoenix, The moment snot shot out of his nose in Stand By Me while crying to Gordie during their night watch, I was in love. I thought he has snot just like people who aren’t famous.. He’s REAL! He’s also real hot and we were gonna make real cute babies together. Though, sadly that day never came. He is missed.. Vs. Johnny Depp who was too cool to be real. This cry baby made me want a massage from someone with Freddie Cruger hands and that’s a feat well hands, but a feat.

Pairing 5: They must have been genetically altered because it’s not human to be this attractive, Melee … Have Mercy on this one!

John Blackie Stamos, won my heart in General Hospital and made me want to commit incest in Full House! Everybody’s favorite Elvis impersonator… Vs. Rob Lowe, the guy I spent nights crying over, because I was sooo in love and he didn’t even know I existed! And by nights, I mean, years! He’s everyone’s favorite drunk sax player…

Tom Cruise, the hottest guy to ever hire a hooker. The cutest factory worker. The suavest bottle juggler. And the 2nd sexiest vampire… (Before he jumped on couches and got all crazy)  Vs. Val Kilmer, my favorite hottie with humor (think Top Secret and Real Genius)…  The volleyball spinning rock star whose leather pants we all wanted to get into.

PLEASE SHARE THIS WITH ANYONE WHO HAD TIGER BEAT PIN-UPS LINING THEIR WALLS AND TRULY THOUGHT THEY’D MARRY ONE OF THESE GUYS – SO LIKE, EVERY GEN X GIRL YOU KNOW!