After a lump scare in my late-20′s, I learned that all lumps are not the C-word and it’s totally okay to get to 2nd base with yourself! 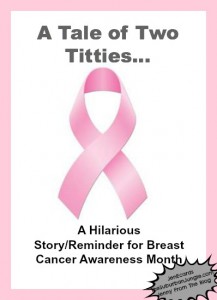 Let me tell you a tale, a tale of two titties (oh, how that word makes me cringe, but it’s so much better for the pun)…

After finding a pea sized lump and getting a needle biopsy, I was told that like the several million other young women with fibrous breast tissue, I would be required to get a yearly mammogram and ultrasound.

I’d heard horrible tales of the mammogram and it’s crushing pain. I feared the impending torture and dreaded that, what little my child bearing and breastfeeding had left unscathed, would be permanently altered.

By the time my appointment had rolled around, the fear of having something less benign than a fibroid cyst had started to set in, as well.  If I can produce one kind of growth with no knowledge of it, why can’t I produce another kind?

While contemplating in the waiting room, I saw a woman, not a day under 100.  OK, if she can do this, so can I, I thought, resigned to get through this. END_OF_DOCUMENT_TOKEN_TO_BE_REPLACED

I had a mammogram this week.  I have to get one every year; though tatas are small, there is miraculously  room for fibroid cysts.  My tech went so far as to comment on my boobies, saying they’re “perfectly perky.”  Well, she said that after laughing aloud at the thought of getting my A’s to stay up on the shelf of the machine.    My tech was crass to say the least, but her outrageous inability to filter actually shifted my focus and put me at ease.

After enjoying a good chuckle at my “cute and perkies,” my tech stuck on a set of beautiful nipple markers, which are stickers with silver balls that resemble starter earrings.

“Sorry, we’re all out of fringe,” she informed me, still getting a kick out of herself.

“Don’t worry, I have some at home,” I responded, doing the same.

As it turned out, she was right to laugh. The first time on the shelf, they slipped right out. The intense squeezing actually slung-shot them back towards my body.

“What?  Did you butter those puppies?“  She asked, with a snort.

I ignored her, and rubbed my chest to stop the vibration that the ricochet had caused.

The second time she was more thorough and managed to get a couple ribs onboard, as anchors, I assume.

“Um, excuse me, is it okay that you have bones in there too?”

Squeeze, squeeze, squeezing harder. Shelf lifting.  I raised myself onto my tippy-toes to avoid my bosoms being ripped clean off. More squeezing. CRUNCH.

“Oh, are you breast feeding?”

After flattening my boobs into pancakes, I felt like a cartoon victim of a falling anvil. I patiently waited for them to snap back, or for an animated squirrel to come along, stick in a tube and pump them up.There was no one.  No squirrels, or skunks, or any other well-meaning rodents came to my rescue, so I shoved them back into my sports bra.  This is what all the hype was about, what my friends are dreading? The relief of finishing the test was quickly cancelled out by the anxiety of knowing I had to wait for my results.

As I passed the waiting room, I noticed the same elderly woman shakily stick her nipple markers in a plastic baggy and into her purse, where they most likely sunk into an abyss of sucking candies, saltines, and sweet N’ low packets.

I imagined one kinky grandpa with a bottle of Viagra eagerly awaiting her return, and got a chuckle of my own.  If your boobs hang down to your knees and grandpa‘s sight isn‘t what it used to be, you might need some assistance finding your nipples.  That’s one us flat chested folk don’t have to worry about -gravity.

In the end, the findings revealed another benign cyst.  I told my body it is not allowed to create so much as a zit without my permission.  I will, however, still be at next year’s appointment in case my body disobeys my explicit instructions. I want the option of stealing nipple markers in about 70 years.