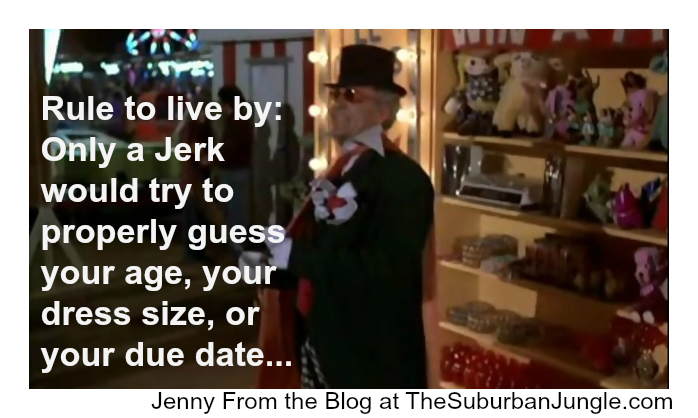 “Really, because I’ve had those marionette lines since I was a child.” I said defensively in an ‘I’ll Show You,’ kinda way. Though, it probably made me sound like I used to be some creepy Howdy Doody looking kid, instead.

Whatever, at least Howdy looked young.

As I mentally cowered, awaiting the end of this torturous (anti-aging) facial, it dawned on me that there is NEVER a time to properly guess someone’s age.  Whether your 4 or 44, you want to hear that you don’t look it.

There’s no prize in guessing someone’s age correctly. Unless you’re some carny from the 1930’s or Steve Martin from The Jerk. If I recall the scene, the prize was nothing you’d want to win anyway… “Anything in this general area right in here… below the stereo and on this side of the bicentennial glasses … between the ashtrays and the thimble. Anything in this three inches right in here … that includes the Chiclets, but not the erasers.” Well, in my case the “prize” was a loss of confidence and the onset of a midlife crisis.

I would have rather gotten the Chiclets.

I feel like most people realize that age is a touchy subject. At least the one’s who want a tip, that is.

From about birth to 20 someone saying you look older than you are is considered a compliment.

In fact, I think that’s kind of how you’d start every sentence from that day on…

“Yep, got mentioned by Willard Scott for being 100.”

“Could you put a shot of Maalox in my tea, I’m a fucking hundred, you know?”

“Give me my teeth, you old whipper-snapper, I’m a century old.”

I feel like I could keep doing this all day, but I’ll stop. My point is, guessing someone’s age should always be padded by a couple years in whichever direction will be most complimentary! THAT SHOULD BE A RULE.

I don’t care if you’re a highly deductive facialist, a fortune teller, or you’re looking directly at my birth-certificate – Make me 5 to 10 years younger, no matter what.

It’s like my rule about never guessing what size someone wears. When I worked in a boutique, I NEVER did that thing where the salesperson sizes you up and says, “You look like about an 8, right?” Well, maybe I said those exact words, but only if I was sure that person was a size 12, at a minimum.

I also learned a similar rule applies to asking pregnant people when they’re due (I learned that rule the hard way). It goes:  “I don’t care if you met her in a Lamaz class, NEVER ask a woman when she is due – unless she tells you she’s pregnant or you actually see the baby crowning.”

PS As a tip, I allowed my facialist to pick anything in my purse … between the mini Kleenex and the and the side zipper, but not the wallet or the iPhone. Anything between the My Little Pony from McDonalds and the rogue Bey Blade, but not the loose change or the Smashbox lipgloss.

She chose an opened, but not eaten, restaurant mint.

I think it was a good choice.

18 thoughts on “There is No Good Reason to Properly Guess Someone’s Age, Size or Pregnancy Status – EVER!”