See how polite I’m being?  Calling him an elderly gentleman and not an old curmudgeon?  No, that would be rude and I am not rude.  Well, unless you consider running a poor old curmudgeon over with your car “rude.”  Then yes, I may be rude, but I have an excellent vocabulary and that has to count for something. END_OF_DOCUMENT_TOKEN_TO_BE_REPLACED

This is what happens when you ask a bright child a simple question – you get sucked into some vortex where “kid reasoning” makes good sense and you end up regretting the question and inevitably rethinking the outcome.  This is why we should all just talk to our children less.

“You wanna pick out a new tree with me, this bougainvillaea has seen better days?”

“Sure, but then where are we going to put this bougainvillaea?”

“Honey, this tree has been dead for like 2 years.  I think, I’ve given it ample time to prove me wrong.”

“SO, you’re just going to throw it away?  Just like that?” Said with hands on hips as if I’m throwing away the cat for puking up a hairball.

“Nooooooo, (sob sob), gosh they go from calm to melt down mode fast, you can’t throw it away mom.  Why don’t you give it to Haiti.”

My 7 year old daughter seems to think that the people in Haiti need everything, down to a lone left over piece of pizza.

Seriously, you're freaking kidding me right?!

Like with leftovers, I imagine the shipping on a tree wouldn’t be very cost effective.  I also imagine the look on some poor Haitian child’s face when he eagerly tears into a package from the US containing a slice of old pizza or in this case, a dead tree.

Don’t get me wrong, I’m so glad some of what I’ve been preaching about charity and giving back is sinking in.  However misguided her suggestions, her intentions are good.

“OK honey, I can’t send the tree to Haiti, so who am I giving it to”

“Someone who needs one.”

“Someone who needs a dead tree?  Should I put it on Craig’s List?”

“No mom, someone less fortunate.”

“You mean someone without a dead tree?  Maybe a person who can’t afford bad landscaping?”

"Hey guy on my left, why no belongings?" "Because I don't have a stick or branch. If I just had a tree all my problems would be solved!"

Ahhh,  a hobo – a word commonly used in the early 1900s and for some reason, also used by my children.

“Yes those homeless folks or should I call them tramps, could really use a tree.  I mean, since they’re known for carrying all their belongings in a ‘kerchief sack, we should give them a whole tree, so they would never run out of branches to tie their sacks to.”

“I just don’t want the tree to be left somewhere to die. It deserves better!”

That actually does sound sad.  I mean, what did the tree ever do to me, other than try to provide shade for my family and produce beautiful fuchsia flowers?

Maybe, I can send it somewhere?  Maybe 2 years isn’t enough time to leave it on life support.  Maybe I shouldn’t pull the plug.

What do they call a tree doctor?  A taxidermist?  No, that’s not right.  An arbordermist?  Something like that.  I should call one.   If it were a palm tree I could call a palm reader.

Jenny, get a hold of yourself.  You’re not calling a tree doctor, but I did enjoy that joke.  Pull it together and stay tough!

“You know what?  Maybe we could have them make the tree into mulch.  They would chop it up and then put it around other trees.”

“Nooooo don’t chop up the tree.” Said as if I were suggesting some form of painful tree torture.

“Why, that seems like a lovely option, that way the tree could keep giving.  Like the giving tree.  Oh G-d, The Giving Tree, what a moving story…  Anyway, his mulch could feed other trees and the Earth.  How beautiful (sob sob) the circle of life and all.”

“NO!  When Buddy died did you chop him up and feed him to other dogs?”

“OK, you’re right… We keep the tree!  It belongs here with us, it’s our ugly, unflowering spikey dead tree.  Even if it’s on it’s last limb, which it is by the way… it’s OURS!”

This may seem a bit premature, but if there are such things as debate team scouts out there, you may want to hold a spot for the year 2022.

This conversation actually happened.  As a humor blogger, I see the “funny” in it, but it also opened my eyes to one possibility that no one’s gonna take care of me when I’m old!

I was diagnosed with Orthostatic Sycopate. See: (How to Retain Water and Lose Sanity and Altoids and Coffee a Deadly Combination? for more funniness on that).

Indian Chief definition of orthostatic syncopate: Electrical malfunction when stand up, blood pressure drop like big ball in sky when night come, blood no travel to head, brain freak out like herd of buffalo, no air,  pass-out like Princess Drinking Slut after long night in tee-pee.

First, I want to apologize to all my Indian readers for doing such a cliche impression, plus that picture of that Indian on the left is pretty cheesy, I realize it makes me look totally ignorant to the American Indian culture.  To redeem myself a big “How” to all of you.  Okay, I think that’s better.

Moving on, (please read the rest in a British accent as that is how I’m writing it) this diagnosis was just another one of those “aging” things.  Like cellulite dimples on non fatty areas like your calves, veins that are trying to escape from your legs or having to crack air into your vertabrae after standing or walking for upwards of 10 minutes.

Since finding out, I have not found myself suddenly unconscious.  I know, jig time.   Yesterday, I came uncomfortably close.  I realized that putting a Fat Burn powder boost in an espresso/frozen yogurt smoothie is not the best way to even out your blood pressure.   I know what you’re thinking: chromium picolinate, fro yo, and espresso… “that’s a heart healthy way to start the day, maybe you should chase it with a Red Bull and do a couple lines before going for a run.”

Don’t judge, I needed that fat burn boost to combat the calories in that one drink alone.  Anywho, racy and overheated, I lied down on the floor and put my feet up on the wall… to get blood to my brain. Never fear, my son was around, so I knew I’d be in good hands.

Jake listened and absorbed the instructions as to his course of action.  Then he looked at me on the floor, “Um, okay.  Bye.”  He said, as he zoomed out of the room.  I  then heard the chime of someone continuing a game on XBOX.

Me:  “Uhh, Jake. JAKE.   JAAAAKE” I screamed with all the energy left in me, as the TV was set a volume you would need if you were playing against someone across the street and they didn’t have an actual TV.

Me:  “I hate to interrupt your game, but could you come back for just a sec?”

Me:  “A minute ago you were praying by my side and then ‘bye?’  You don’t even want to stick around for a few minutes and make sure I stay conscious?  How would you even know if I passed out?”

Me: “I feel like something’s been lost in translation here.  You know what?  Stay here for a few, the TV’s so loud I don’t know if you’d be able to hear me if I scream to inform you that I’m no longer awake.”

He then sat on the bed and asked me questions about calling 911 like, “Would they get mad if I called and then you woke up?”  “How do they know where to go?” and “Does someone answer the phone or is it a machine?” Distracted by his own line of questioning he sat for another minute or two, hopped off the bed and said “Okay, bye.”

Well, there goes the retirement home.

Where do I get one of these with Brad Pitt's face on it?

Why is it so hard to cancel a gym membership when it’s so easy not to use it?

In light of the recent findings that say women must workout 1 hour per day, I’ve decided to revamp my workout schedule.  First on the list… Leave the Athletic Club, which I have not used in a year…then use the money I’m saving to buy bigger clothes.

END_OF_DOCUMENT_TOKEN_TO_BE_REPLACED 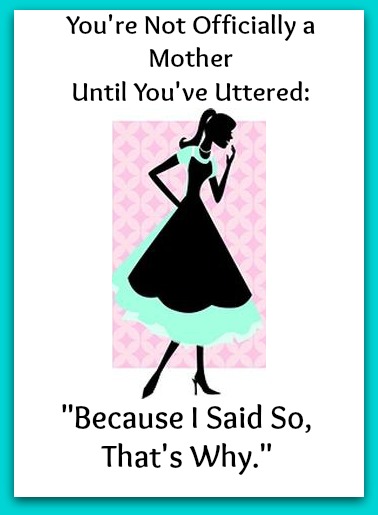 As a child, I too encountered the dreaded “Because I Said So.”  It was usually yelled in frustration or hissed between clenched teeth.  No matter what the method of delivery, it signified the end of the discussion.  I remember wondering, what exactly does that mean and why is that a remotely valid argument?  It was a parental trap; there was no way to fight it, and yet you felt unsatisfied in conceding.

Now, at 30 somethingish I know what it means.  It means you’re losing the battle with a child.  Yep, “Because I Said So” is the phrase used when you are being outsmarted or out-debated by an 8-year -old.  The truth is, sometimes their reasoning makes sense … a lot of sense.  Sometimes, I listen and think, okay, let’s do it your way.  But most of the time there’s a reason I’ve made a particular choice and I have to stick by it, well that or I’m just another stubborn adult standing on ceremony.

I never imagined that I would be losing arguments to 8-year-olds or even 5-year-olds, for that matter.  “They’re smart little buggers, aren’t they? Want proof? I recently partook in this exchange: END_OF_DOCUMENT_TOKEN_TO_BE_REPLACED