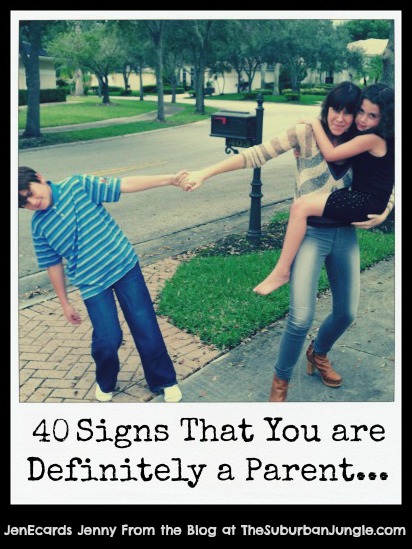 After writing about how you know if you’re the mom of a boy or the mom of a girl, I realized there are so many indicators that define us moms and literally set us apart from every other life force on Earth. So, here you have it: Signs You’re a Mom or as I like to say, You Know You’re a Moms IF…

1.  You haven’t heard your actual name the entire day, but you’ve been beckoned relentlessly.

2.  You’ve ever sang Old MacDonald with the same enthusiasm you once sang I Will Survive.

3.  Lying is always an option, as in … “I’m sorry, the arcade is closed on Sunday.” “I love the outfit you put together yourself.” “You’re right, you do sound just like Beyonce when you sing.” and “No, they don’t give ketchup at the drive-thru.”

4.  You have some sort of stain on your clothing that you would literally have to taste to place.  What is that latte or spit up? Hmm… Gimme a sec…  Oh, it’s spit up.

6.  A bulldozer could roll by your bedroom and you wouldn’t even rustle, however you could decipher the sound of a sniffle at 4AM … across the house … without a monitor … in a thunder storm.

7.  You’ve circled the block quite a few times solely to extend your date night past 9PM.

8.  You’ve actually fallen asleep while reading The Very Hungry Caterpillar, singing the alphabet, or trying to figure out what sound a chick makes.

9.  You have an arsenal of shameful tactics to convince other humans to eat (“Here comes the plane.” “There’s a party in your belly.” “Of course, there aren’t veggies in this brownie. Why would anyone do something crazy like that?”)

10. You are fully capable of having conversations while sleeping and they may be as scintillating as the ones you have when you’re awake.

12. You’ve recently been asked to look at someone’s poop for assessment or for no reason at all.

13. You repeat things you swore you never would, like: “Because I said so.” “One day you’ll thank me.” and “Are your legs broken?” simply because they buy you just a minute of peace — and that is way more valuable than keeping any promise you made to yourself when you were a kid.

14. Someone at some point has peed, pooped, or thrown-up on you and it may have happened in the same day.

15. You consider scented hand sanitizer to be a fancy purchase.

16. Someone else uses your smart phone and all your tech products, for that matter, more than you do.

17. You live in a world where “Maybe” means never and  “We’ll See” means, when hell freezes over, but somehow those around you haven’t picked up on it yet.

18. You can cut a sandwich into many more shapes than two triangles.

19. You consider a night at TGIFriday’s fine dining.

20. You can’t pee, sleep, or shower without knowing there’s a distinct possibility you’ll have company.

21. You’ve used all the dishes out of the dishwasher before you got around to actually unloading it.

22. You can use your keyboard, phone, iPad, but there’s a good chance your fingers will stick to it.

24. You’re busier than Martha Stewart, Ryan Seacrest and Donald Trump … all rolled into one.

25. You do more pretend cooking in a miniature kitchen than you do actual cooking in the full sized one (and frankly, you’re not sure which tastes better).

26. You secretly wish there was some mommy competition involving your child’s trendy crafts because you’re a freakin’ whiz on the Rainbow Loom, you make a mean potholder, and you’re not so bad with a spool of gimp ahem, lanyard.

27. A dance party, song fest, or drawing competition may be impromptu … but it’s never unexpected.

28. Dealing with a monumental breakdown over the over the tag in a shirt, the seam on the sock, or the elastic on of a pair of undies seems totally normal.

29. You know the one rule about stuffed animals: One Can Never Have Too Many of Them!

30. Your make-believe life is way more exiting than your actual life.

31.  ANYTHING can be over-dramatized… a trip to Target feels like a Spanish soap opera.

33. If you find yourself holding a living creature that you would usually run away from screaming.

34. You have an unhealthy knowledge of the point/gem system for Temple Run, Dragonvale, Bakugan, Plants vs. Zombies, Cube Runner …

35. You bought a car based solely on how much you could fit in the trunk.

36. You’ve actually placed yourself under a tree with the feeling that, if that kiddo loses footing, you’ll at least be there to break the fall.

37. You know the pain of stepping on a Lego … and may in fact, have one imbedded somewhere in your body right now.

38. You’ve found yourself saying things like, “No, you can’t ride the dog.” and “Yes, you do have to keep your pants on in public.”

39. You’re on a first name basis with the orderlies at the ER who provide slings, splints, casts, and those velcro boots.

40. You have a love so intense, so fierce, so all consuming — it can only be understood by another mother.

XO- Jenny From the Blog

Join Jenny At Laughing at Life’s Little Ironies on Facebook

20 Mommisms Translated – What they Really Mean