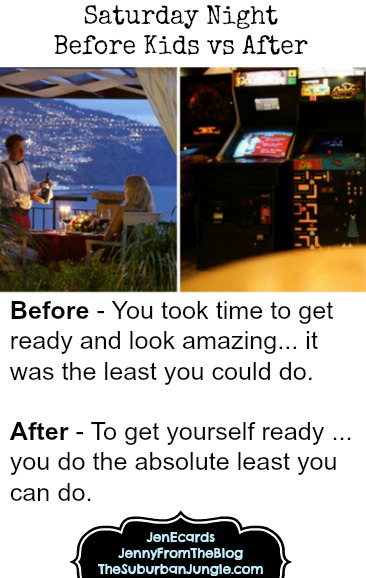 I recently analyzed the not so subtle differences in what I found hot before marriage and after marriage and now it’s time to take a good hard look at the evolution of the date night. Then vs Now:
END_OF_DOCUMENT_TOKEN_TO_BE_REPLACED

So sad she had to be shamed in public that way, but they moved the sofa and this is what they found. She’s one sick puppy! (From MyDumbDogs.wordpress.com)

Yesterday, I saw an ad in the sidebar of facebook for a page called “I Love My Children.” It simply read: “Push LIKE if you love your children.” What’s crazier is that 5 of my friends had already “LIKED” said page (you know how it shows you that too?).

Wow, ladies you LOVE your children? No way! I can’t even wrap my head around it because you totally seemed like the types to down right hate your children, but then you went and pushed that button and now I’m all, “Maybe I misjudged you.” “Maybe you’re the best moms, like ever!” “Maybe you could watch mine sometime.” Then of course it dawned on me how very many of you so called friends of mine clearly DO NOT love your children which you made abundantly clear by NOT pushing “like”!

PS – To my mom and dad (who are on FB): I knew it! Don’t expect calls on your birthdays either … a-holes.

Is it just me or has the social networking world has gone bat shit crazy! END_OF_DOCUMENT_TOKEN_TO_BE_REPLACED

For years I’ve tried to keep up with the celebrity mommas, but maybe it’s time to call it quits. Here are some of the trends celeb parents have started thus far. Yes, I’ve logged them for you.

Let’s go back to the simpler days, when “with child” became the new “in rehab.” Oh, how I enjoyed that shift in trends, I was able to finally stop popping Adderall like Smarties… and start a family.

Next, the paparazzi traded the “crotch shot” for the “baby bump” — another adjustment I was willing to make. I loved being on baby bump watch with Access Hollywood and Us Weekly, even if I was looking at  false alarms of bloated actresses who had just downed some salty Chinese take-out.  Look, anything’s better than staring at LiLo’s firecrotch… again.  Plus, let’s just say my Brazilian waxing bills were through the roof, as I never knew when someone would snap a surprise pic of my undercarriage while I provocatively exited a cab.

Then of course, celebs threw us for a loop by naming their kids things like END_OF_DOCUMENT_TOKEN_TO_BE_REPLACED

Counseling Addiction –  Those were the words in the title of an email I just received.  I didn’t read on, I didn’t have to.  I get the gist and I’m shocked.

It’s never dawned on me that this would be an issue, but why the f@ck not?  I mean, tons of people love counseling – I’m one of them.  Though I haven’t found the time to go recently, which means I’m probably not an addict, per se.

In fact, as a double major – one of them being psychology – I found that many people in my classes were taking these courses in hopes of fixing themselves.

Well, we know that never works.  If it did, no one would say, “you should take your own advice,” in that snarky way that they do.

Needless to say, I spent much time in college and Grad school with people who were anxiety stricken, or OCD (like myself) or narcissists, or bipolar, or… had other fun complexes.  Then they become practicing therapists and now spend a lot of time telling other people what to do and what’s wrong with them.

If you went around dissecting my psyche and telling me how to fix it, I would not make plans with you… often.  But, we pay for therapists to tell us such things.  Then we respond with phrases like:  “Yessss, that’s why I’m so controlling” and “oh my G-d you’re so right, I do substitute food for love,” and “sure, sure my passive aggressive behavior is obviously an outlet for my suppressed emotional responses,” and other shit we say in therapists offices in hopes of feeling less inferior.

But, now that there’s a new disorder coming from over-therapizing, I say we get off the proverbial couch and take a stand.  I mean people don’t get paid to tell you things that may happen to you in the future, do they?  Of course not.  So, why should we pay people to label us now?

Frankly, I think we’re all doing pretty good, considering…   The O-Zone is disintegrating, American’s throw away 250 million tons of trash/year, the unemployment rate is 8.6%, we’re all getting older and wrinklier and less bendy by the second, and the shoes in my closet never seem to be perfectly straight!

So, “Say Nay to Thera-pay!”  I know, catchy right?  I’m like the Norma Rae of head shrinking.  Screw Jung and Freud and Adler, who needs ’em and their theories?  The 54 million American’s who suffer from mental illness in a given year?  Nah.

Addendum to this post:  I just clicked the email with the Title: Counseling Addiction  The subject line said this:  Help fight substance abuse as a counselor.

We say it all the time, “my kid’s 6 going on 16” or as I like to say, “She was born a 7th grader,” but how do you reconcile the lag in actual and perceived age?

Heels and an Elmo? Point made!

Not unlike my hubby, my kids are stuck somewhere between adulthood and infancy?  My daughter, like most little girls now a days, embodies this dilemma a bit too well.

On some level, my daughter’s ready for a day at the Galleria with the girls, while at the same time she maintains a sweet innocence that’s more fitting of her numerical age.  It’s the conversations during our imaginary play that truly highlight this incongruity…

They also makes me laugh so hard that I pee.

Sorry, I was beginning to sound too astute, I mean knowingish for my liking.  (That should fix it.)

She  gets the flow of small talk – the cadence, the structure, the usual phrasing, which takes our play to a whole other level.

Yesterday she asked to braid my hair.

Ryan:  “I can’t complain… Been watching a lot of the sports channel these days?” (a questions directly influenced by the males in my household.)

Ryan:  “How about that weather, huh?”

The chit chat went on for a while.  Luckily, I found it more enjoyable then I do when I’m forced to have it with people I didn’t birth from my womb.

(Which, by the way, is most people.  I thought I’d clarify that point.)

We went on to switch our make-believe scenario to a school situation.  Our imaginary play is like a game of Monopoly with stockbrokers or investment bankers, melodramatic, high stakes, and never ending.

The characters and situations in our games change, but it’s constantly being played: while I cook, nap, shower, pee.  (Did anyone read the Night Circus?)

Ryan (who is always the boss in make believe world… as well as actual world, come to think of it): “Let’s pretend you passed me a note in class and I was really popular and everyone liked me and you were shy and kinda weird looking, but I was going to be nice to you anyway, because I’m always nice.”

Ryan: “OK, now let’s say you passed me a note and I answered all the questions correctly.  Like anything with math or spelling, you know?”

Me:  “Well, when people send notes they aren’t usually asking academic questions.  They’re saying stuff like, ‘Do you like Billy?’ or ‘Are you going to Jessica’s party Friday night?’ You know, more personal stuff.”

Ryan:  “OK OK, (exasperated, as if my explanation droned on for hours) I’ll make up the questions you are going to ask in the note and then I’ll tell you what I’m answering, as the person I’m being.”

Ryan:  “So you understand how it works, right mom?

Me:  Sheesh, no one takes you on your word anymore.  “OK Ryan, you’re going to tell me the question I supposedly wrote on our pretend note and then you’re going to also answer that question how you would answer it.”

Ryan:  “Good, now, Are you a vegetarian?  (pause to answer her own question) Yes.  Do you like hot dogs? (pausing again) No.”

Me: “Well, that was a really long pause for a vegetarian.”

Me:  “ Wait a sec, can we go back a couple?  Wow, that religion question sandwiched in there between the deli meats caught me a bit off guard.  Did you ask for a reason?”

Me:  “OK, I forgot.” Apparently, I go around asking people if they’re Jewish or maybe I wanted to see if she keeps kosher.

OK, I’m done.  Now you be the person who wrote the note and react to my answers.”

Me:  “Yep, and we’re both Jewish, so of course there’s the similarities in our religious, not to mention, social upbringing.”

Me:  “What are the odds?  Two Jewish girls who don’t eat pork and like presents, rainbows and unicorns?

This is what happens when you’re 7 years old with the attitude  7th grader, conversations are a cross between Clueless and My Little Pony.